The Company was founded back in 1974, based on a revolutionary foldable and functional serving trolley, created by the Company founder, Giancarlo Pezzani, a creative designer and entrepreneur of the sector. A product so innovative and successful, the Speedy trolley deserved the establishment of a new company, which was then named after the trolley itself: Speedy. The Speedy trolley, a synthesis of functional character and innovation – even though the original trolley is no longer in production – it does represent the base of the company’s philosophy: “to create state-of-the-art articles, of innovative design, with the taste and ability that only a highly talented artisan can achieve”. The success of this item was immediate and the Company expanded in the field of gift articles by also adding to its production line tea-trolleys, trays and coffee tables made of high quality steel and glass. New sales were directed to foreign markets too that historically are keen on products of Italian design.

As of 1992 Giancarlo Pezzani’s sons Massimo, Cristiano and Giovanni take the place of the founder in the Company management and decide to expand and develop the trade in the furniture field. Thus is born a collection consisting of small pieces of furniture with an innovative design obtained by the harmonic synthesis of unique materials such as steel, aluminium, glass and solid wood. These items were conceived combining our experience and craftsmanship expertise with the most advanced technologies. In the last 5 years the offer has been increased constantly, by introducing exclusive and inimitable objects that can satisfy customers, the most exigent too, with their original shapes and fashionable colors.

In the last period, the Company has developed in such an important way, that a new brand was needed. For this reason, to better reflect who we have become, the Management in 2011 changed its brand into PEZZANI Home collection. The new brand, which directly makes use of Pezzani family name, will better identify the Company as an Italian producer of elegant and sophisticated furniture. A daring marketing decision truly reflecting the transformation that the Company has undergone during its history. This evolution is going on with the development of a purchase order APP for tablets, smartphones and PC that gives to our partners the possibility to see the catalogue, select items and send an order in an easy way. This APP is also an updated on-line catalogue, to show items to customers and to save pre-order to be confirmed later.

A way to think and to do where different experiences meet themselves: conceptualism and formal study of designers and the artisanal experience in which the company was born. The union of these two different ways of thinking and doing, together with the contamination of the most recent market trends, create Pezzani Home collection items. They are characterized by the essential design, the using of traditional but renewed materials, the continuous research of quality and functionality which distinguish each of our item. 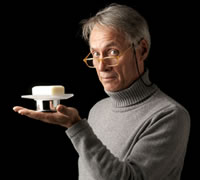 Born in Germany
Fine Arts Diploma at the Academy in Hamburg.
Master in "Artistic Education" at the Hamburg University i.
Several prizes and education grants
From 1982 he has being working in Florence in design and visible art filed
Collaboration with Studio Kouros in Lipparini e Tapinassi
Projects for Companies in Italy, Germany and Switzerland in TEXTILE- STUFFED- FURNITURE- HOME ACCESSORIES - BATH FURNISHING sectors.
From 1998 he has his own Design and Graphic-Design Studio in Florence.
Head of Speedy artistic direction. 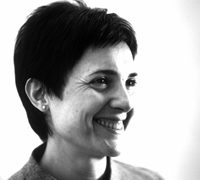 She was born in La Spezia in 1960.
1981: Diploma in Industrial design at the Polytechnic of Design, Milan. In the same year he begins her collaboration with Barbieri e Marianelli Studio (an industrial design, graphic art and garchitecture Studio). Till 1990, in this Studio, she works for Tronconi, Rexite e Zucchetti by dealing not only with drawing, but also with advertising and publicity.
In 1990 she begins to work as industrial and graphical designer. In the same time, she collaborate with the Studio of Eliana Lorena, where she has specialize in Color & Texture design and with La Viola Associati where she collaborate at the global imagine definition of "Caffè Palladio" in Seoul and at a packaging for L'Oréal.
From 1999 to 2002 she is partner of "MCA & Partners" Studio. In that period, she develops her researches in Trend Color & Texture for Mandarina Duck, Fila Italia, Fiat, Lancia, Olivetti and Chicco, She planes the global imagine of Banca Popolare of Seibu in Tokyo, draws a bags collection for Moncler and furniture for Malofancon. Nowadays, she works on her' s own. She has worked for customers as: Tronconi, Tecknolit, Steel, Tonelli, Malofancon, Speedy, Giannini, Manital, Cedit, Versace Sport, Fila Italia, Missoni, Tirreno gruppo Editoriale, Gruppo Fabriano, Seiko, Lisar and Alessi. 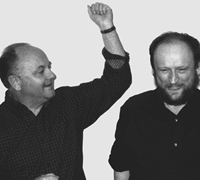 Archirivolto was founded in 1983 as industrial planning, design and architecture studio.
While studying Architecture in Florence, Claudio e Marco and some friends put up an experimental theatre group . When they decide to focus their joint efforts on design, consolidating their ties of friendship , their interest in theatre strongly influenced the set–up of their new studio: drenched in creativity, sense of reality, respect and attention for the public. Keen on gaining an insight into the world of production and market, they started off managing an interior decoration shop. In 1995 the young designer Cristian Gori, from Siena Art Institute, joins the group.
For Archirivolto design means beauty, harmony and freedom and cannot therefore be bound by strict, pre–established rules, nor can it be a privilege for a social or culture elite. The designer is committed to create beauty for everyone and to make design approachable for an ever increasing number of people. 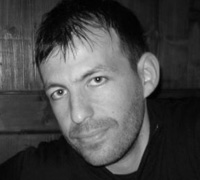 Antonio Lanzillo was born in 1976. He is an Italian Designer with a degree at Politecnico of Milan. In 2006 founds his Design Studio in Milan.
He begins his free lance career in 2001, in plastic mould field; in 2002 is one of the finalists in completion for the brand of Olympic Games "Turin 2006" . From 2001 to 2003 takes part at "Salone Satellite" at Salone del Mobile di Milano.

In 2005 he receives the prize YUONG & DESIGN by Rima and draws a collection of lamps Fontana Arte.
In 2006 drew several watches for Lorenz S.p.A.; realized a project for Colico Design and became consultant for Technogym group.
In 2007 realizes the bookcase LOUVRE for Speedy Italia.
In 2008 he draws for Philip Watch (Morellato group).
His projects are characterized by originality and functional innovation.
His style is a synthesis of research, observation and intuition.
His claim is THINK BEFORE DESIGN
He has designed for: Speedy, Vasart, FAER, Fontana Arte, Lorenz Orologi, Technogym, Colico Design, Arrmet, Philip Watch, Rintal.
www.tonylanzillo.it 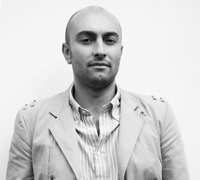 Francesco Sani, was born in Fucecchio in 1978, where today continues to live and work. He graduated in architecture at Florence University in 2003 with a work that allows him to achieved an award of Rotary International, after that in 2001 he attended an high specialization course in bioclimatic architecture.
After the graduation he started his professional career in 2004 opening his personal office Francesco Sani Architetto, he started to work both as architect and designer. He works designing private and public spaces (like show-room, retails, clubs and exhibition spaces) and industrial products especially in lighting and furniture.
With the first works arrives also awards and selections: the wave lamp collection is one of the nominated products for I.d.o.t. 06/07, the Vivaevegeta lamp approached to the final selection of D&AD award, the Poprings project achieves a special nomination in progetti di luce 06 competition, the daily egg project is selected in ceramics for breakfast international design competition and last but not least Francesco Sani get a special selection in the Young & Design 09 international design competition with the Gong lamp collection. To improve himself in 2007 he attended a specialization course at POLI.Design Consorzio Politecnico di Milano and from 2008 he teachs Interior Design at "Istituti Callegari Milano" a school of "Accademia del Lusso".
Today he dedicates himself to architecture, interior design, product design and communication, items apparently different, but that are parts of an unique way of designing.